For me, spring time means concert time. But for a college student like myself, there’s a very intricate matrix that determines what shows I’m going to see. Most of the time, it boils down to money (if you’re curious the other factors include, but are not limited to, proximity of the concert venue to a Chipotle, likelihood of me badgering the drummer into giving me a drumstick, and how many friends I can convince to come with me).  I’d love to spend $75 dollars to see the Red Hot Chili Peppers or Radiohead whenever they’re in town, but as much as I love playing “count the tattoos on Anthony Kiedis’ shirtless torso”, it gets a little pricey.

Fortunately, small-time indie bands are much more in my price range. Today hopefully I’ll get you excited about some upcoming concerts through their music videos.

First up: a band that opted for a name on the more unique side, the Freelance Whales. The band is just shy of 2 years old, but already rising quickly with a sold out show at the Bowery Ball room tomorrow night. Here’s their video for their hit, “Generator ^ Second Floor”: 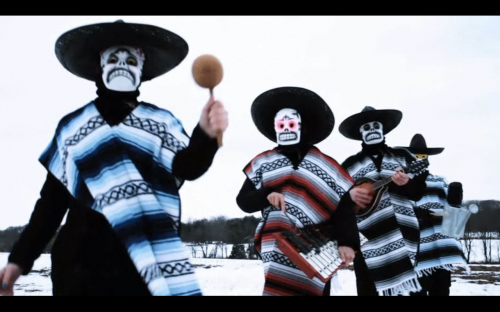 What’s not to like? When have you ever seen a band of Cinco de Mayo skeleton mariachi this cheerful? While “Generator ^ First Floor” is about the beginning of life, and the Second floor, as you may have guessed is its end. As the beautiful chorus implores:

Don’t fix my smile, Life is long enough
We will put this flesh into the ground again.

And the bells and joyful voices in the song and the light-hearted nature help to support this serene view of Death. If you’re bummed about missing them tomorrow, no fear! They’ll be back in town at Webster Hall on May 5th, opening up for the Shout Out Louds.

Next up: Hot Chip, a band from London that will be coming to Terminal 5 on April 22nd and 23rd. Check them out. Here is their video for “And I Was a Boy From School”:

Hot Chip has been hot “ship” lately – touring recently with the XX, and getting scheduled to play at both Coachella out in California and Lollapolooza in Chicago. Overall they’re a pretty low-key lounge-y band, with electronic-laced beats and lyrics that have a tendency to be repeated a lot. Trying to figure out what the game is in this video keeps you entertained however, even if the end result is a little tacky. They’ll also be coming to NYC’s Summerstage this August in Central Park – so you can get those tickets now.

Ok that last one turned out to be a little metaphysical, too. Here’s two bands offering some more upbeat music.

First is the Irish folk-rock duo Guggenheim Grotto. They’ve released two albums now, and have a knack for creating truly artful music. The video for “Her Beautiful Ideas” off of 2009’s Happy the Man, has some whimsically great stop-motion animation. What are her beautiful ideas?

Well, the Guggenheim gentlemen have one idea: Let’s get naked and get under the sheets. Out of context it sounds a little strange sure, but this song is bright and sunny and full of love. Catch the Grotto at The Bowery Electric on June 2nd.

But here’s a song that just about music. The Peak’s been digging this track recently, “Song Away” by Hockey:

The first time I watched this song I didn’t really connect with it – due to some things that the video tried to tell me were true: like white kids from Portland playing craps, or that they found lots of fancy recording equipment in the LA river. But the next few spins (and that hawk!) really got me. Benjamin Gruber, hipster extraordinaire and lead singer of the band has got a voice that sounds unique and classic at the same time. The video blooms with color about two minutes through with vivid blues and oranges, and the $200 dollars of fireworks don’t hurt either. All in all, a fun song that celebrates all aspects of life.

Unfortunately, they’re not coming to NY soon, but they played Bonaroo last year, so there’s a chance that they might show up at All Points West.

If not, hopefully at least one of these artists has whet your appetite for some wholesome indie music. Please comment if you’re going to a hip show soon!

Blast from the past: Third Eye Blind will be playing at the Wellmont Theatre in
:: Montclair, NJ on Tuesday as well.

And guitar legend Joe Bonamassa will be playing two shows this week, first on
:: the 15th at Town Hall, and then again on the 17th at the Paramount Center for
:: the Arts in Peekskill. Check it out!

Attack of the Supergroups!

While actress Milla Jovovich may be trying to draw in your attention with talk of extraterrestrial owls and an imminent fear of the fourth kind, there’s a phenomenon that has been slowly gaining momentum in the music world….

Bands and musicians have been switching members and pairing up like Xenon Octa-Flouride (XeF8) would, if it ever is going to be invented (thanks Wikipedia!). In layman’s terms, we’ve been getting a lot of new supergroups, side projects, and collaborations – some that could have been foreseen, and others that seem to have appeared out of nowhere.

Now, the idea of a supergroup is not a recent innovation by any stretch of the imagination – the supergroup goes all the way back to the Almanac Singers – a combination of Millard Lampell, Lee Hayes, Pete Seeger and Woody Guthrie that got its start in 1940. From the 60’s until today, we have been given plenty more supergroups, such as in 1969 which brought us both The Plastic Ono Band (which included the likes of Eric Clapton, both George Harrison and Ringo Starr, Keith Moon and Alan White – just to name a few) as well as Blind Faith (which also featured Mr. Clapton, but had Ginger Baker, Steve Winwood and Ric Grech to boot). 1988 brought us the Traveling Wilburys, which was the tour de force of George Harrison, Jeff Lynne, Roy Orbison, Tom Petty and Bob Dylan. And although they Wilburys only stuck together for about a year after Orbison’s death, that cosmic aligning is something that has not met it’s match… yet. 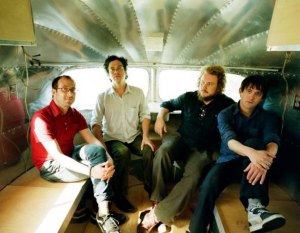 The Monsters of Folk

Among the recent crop of supergroups is a group I mentioned last week – The Monsters of Folk, which consists of folk songsters Connor Oberst and  Mike Mogis from Bright Eyes, M. Ward of She & Him, and Jim James from My Morning Jacket. They’ve been associated under the Monsters name since 2004, but have all been so busy with their respective main attractions that they weren’t able to release their self-titled first album until this year. You’ve definitely heard their track “Say Please” on the Peak – and both M. Ward and Connor Oberst gave free concerts in NYC this summer! 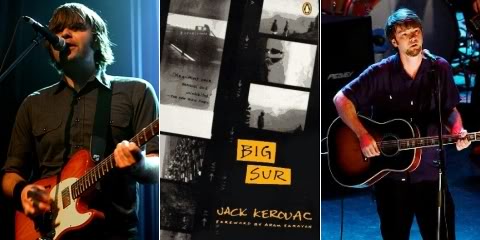 Moving down the line from most folky to least, next up is the recent pairing of Death Cab for Cutie’s Ben Gibbard with Jay Farrar, member of Uncle Tupelo and frontman for Son Volt, the two bands that he played with throughout the 90’s before he launched his solo career in 2001. Gibbard and Farrar first got together in 2007 to record the soundtrack for One Fast Move and I’m Gone: Kerouac’s Big Sur. Both the movie and the album came out on October 20th, the day before the 40th anniversary of the prolific author’s death. You can see the music video for “San Fransisco”, the last track on the album, here. And you can expect to see more from them in the future.

Taking a detour into the realm of electronica, at the end of September, Thom Yorke, the lead singer of Radiohead, slipped this little surprise into his blog:

hi
in the past couple of weeks i’ve been getting a band together for fun to play the eraser stuff live and the new songs etc.. to see if it could work!
here’s a photo.. its me, joey waronker, mauro refosco, flea and nigel godrich.
at the beginning of october the 4th and 5th we are going to do a couple of shows at the Orpheum Theatre in Los Angeles.
we don’t really have a name and the set will not be very long cuz ..well …we haven’t got that much material yet!

Of course, those shows were sold out in 20 minutes. Flea, as you know, is the Red Hot Chili Peppers Bassist – and he seemed to be ecstatic to be on stage with Yorke, playing cuts from Yorke’s solo album The Eraser (2006). There hasn’t been a follow-up to the October concerts, but that’s something you should keep an eye out for as well.

Next up come two really driving groups. First is The Dead Weather, whose song “Hang You Up From the Heavens” I featured in my first week of blog-writing. The Dead Weather was formed by Jack White who’s been extremely active – leaping from the White Stripes, to the Raconteurs, to the recent release of “It Might Get Loud” – a documentary featuring White, The Edge, and Jimmy Page. The band also features Alison Mosshart of the Kills on lead vocals, Dean Fertita of Queens of the Stone Age and Jack Lawrence, who played with White in the Raconteurs. And to sweeten the deal, they just announced a show at the Music Hall of Williamsburg on November 17th! Tickets for that are going on Sale this friday, so get ’em quick.

The "Them Crooked Vultures" teaser photo from earlier this fall

And finally, we come to Them Crooked Vultures, or TCV as they call themselves. TCV is big news. On drums is Dave Grohl, from Nirvana and the Foo Fighters. On vocals and guitar is Josh Homme, from the Queens of the Stone Age. The kicker is that John Paul Jones comes soaring in on bass. They’ve got a really great sound, full and rocking, but what remains to be seen is whether TCV will be able to stay afloat once their star power has worn off. Their self-titled first record is due out on Sony in a week, which should be an insta-grab for all hard rock fans. But for now, check out the full album on the band’s website!

So, I apologize about all the name dropping – it’s not something I routinely do. If you think a supergroup has been left out, please let me know. Or if you feel the need to justify the Tinted Windows‘ existence, by all means, please try. But if you do, I’ll kindly remind you that their lead singer is from Hanson, and we’ll go our separate ways. Wikipedia to the rescue once again!